Find songs when you don't know their names on Spotify

What's in this article?

Spotify just officially launched a new feature on mobile devices (iOS and Android) to help you identify a song just by searching for its lyrics. As long as you know what those lyrics are, you will be able to use them in place of the title.

Spotify will let you know which songs have the suitable Lyrics. I tried to find a song with Vietnamese lyrics, "The moonlight lost its way," then Spotify quickly found a song called Who Brings Loneliness. 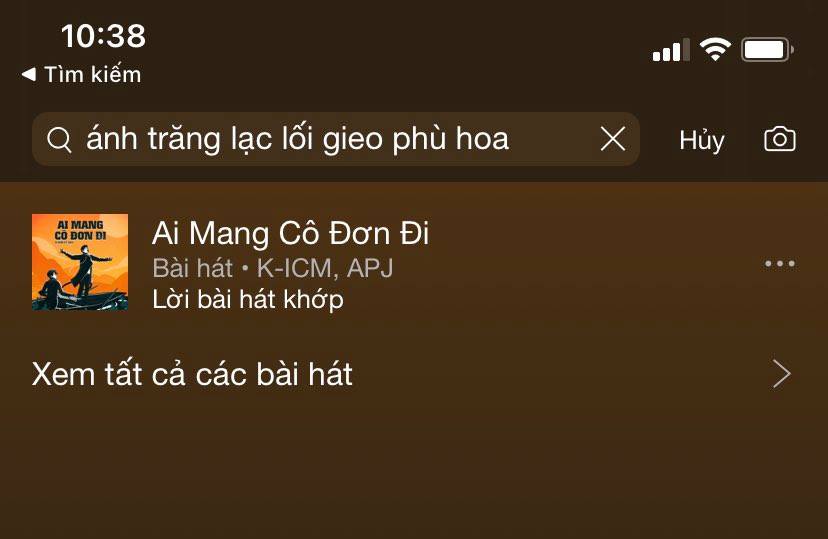 While apps like Shazam or even the Google Assistant can help you find a song that is playing to a tune, they can't help you if all you have is a song you remember vaguely. Spotify's new search hopes to fix all the wishes of the users.

Spotify also recently added lyrics support for its music app globally, while rival YouTube Music did the same in a simultaneous update. Spotify's real-time lyrics support, though, is always much better than YouTube's support for static lyrics, and this new lyrics search feature helps Spotify continue to score points for users.

Recently, Spotify was involved in a controversial lawsuit when on August 11, 2020, Vie Channel made an act by appearing on the Spotify application many recordings were cut from the Rap Viet program. This app's free and paid accounts are both audible. Then on August 13, 2020, Vie Channel also issued a similar license for this violation of Spotify AB with the program Who Is Who? on the Spotify app.

Currently, Spotify has more and more content, especially podcasts. If you have a Premium plan, you can download your favorite songs, albums, playlists and podcasts for listening without an Internet connection. You can download up to 10,000 songs per device (up to 5 different devices). If you use the service for free, you can download podcasts on mobile and tablet devices.

Recently, Spotify also launched a tabbed (tabbed) interface for the music playback screen, each offering different options for the content displayed on that screen. These new tabs will include album art options, Canvas, and a brand new video section. In particular the Canvas feature allows Spotify to display a short video clip instead of album art. However this is not a full music video, it is merely a series of small animations, designed according to music.

A new and also the most anticipated card expected to be added is the video tab, which is said to show full music videos in the Spotify app.

My name is Nguyen Manh Cuong. I was born in a poor village in Ba Vi district, HA NOI province - windy and sunny land. Currently